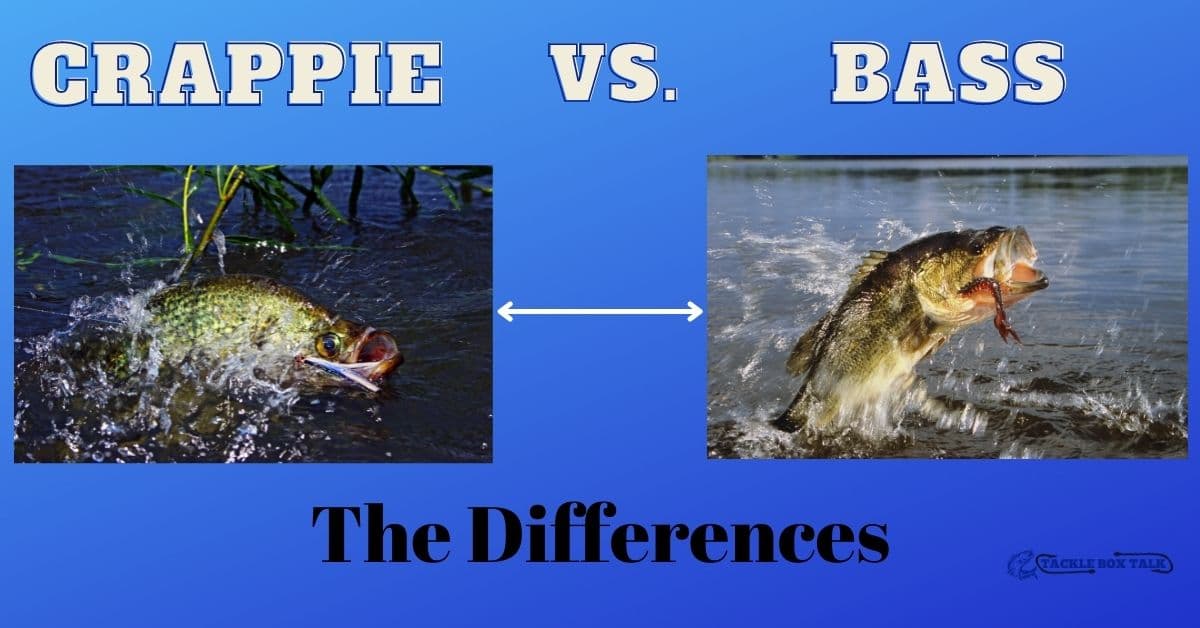 All anglers who have fished in North America know that bass and crappies are the most common freshwater sports fish species. Unfortunately, some anglers don’t know the difference between crappies and bass fish.

And that is because they have many similarities, so after thorough research, we compiled this article on Crappie Vs. Bass: the differences.

Bass and crappies have numerous similarities; they inhabit the same places and have the same shape and feeding habits. The main difference between the two is that the crappies have a more petite body than most bass species.

There is nothing more relaxing for anglers than hunting a specific trophy fish with pals the whole day. And with the different species of bass and crappies being quite popular in the recreational fishing industry, it’s always a great idea to know the difference between these two fish. In fact, with the correct information, you will know exactly where to find them and even track them easily using your fish finders.

Bass refers to a wide range of fish, with a vast percentage belonging to three families from the order Perciformes. These families include:

Crappies refer to the deep-bodied fish belonging to the genus Pomoxis. The term Pomoxis refers to the fish’s spiny gill covers. Crappies are native to the eastern parts of the U.S., but they have been introduced in other parts of the world because they are popular among sport anglers.

The Difference Between Crappies and Bass

The term bass includes numerous marine and freshwater species that vary in size. Therefore in this article, we will focus more on the largemouth, the anglers’ favorite. Both crappies and bass fish are some of the most sought-after fish species by anglers.

These species are vigorous and known for their excitement for the fight. And the fact that they resist being hauled to the shore or into the boat is the main reason why anglers love them. But the smallmouth bass is more vigorous than most basses, including the largemouth bass.

Since they have a similar diet, anglers use the same baits or lures to catch both fish. Some of the most common lures used to capture these fish include some unique lures resembling crayfish and worms, while some anglers prefer live bait.

The largemouth bass can live in a wide range of waters and climates, but they prefer slow-moving waters. A huge percentage of these fish hang around huge patches of weeds, among other covers. And that is because bass and crappies have the same eating habit.

These fish consume aquatic insects, crayfish, and smaller fish. Some of the main differences between crappies and bass include:

The main difference between these two fish is their average size, with the largemouth being the biggest of all bass. The largemouth bass can attain a maximum length of about 29.5 inches, while the crappies are between 4 and 6 inches long. The maximum published size of black crappie is 19.3 inches.

Being the biggest bass, the maximum recorded weight of largemouth bass is more than 25 pounds. On the other hand, the weight of the white crappies is about 2 pounds. With a maximum weight of about 5 pounds, the black crappies are bigger than the white ones.

Other than the body size, the other apparent difference between these fish is their body shape. The maxilla of largemouths stretches beyond the rear margin of their orbit. Like the largemouth bass, the Crappies have a massive mouth with thin lips extending to the lower parts of their eyes.

Is Crappie a Top or Bottom Fish?

Crappies are bottom fish that have similar feeding habits as other bottom feeders. Their special diet is the leading reason why most people mistake them for bottom feeders. Therefore when crappie fishing, you should always aim to present your bait or lure within less than 10 feet of the lake’s bottom for more action.

Is Bass Related to Crappies?

Bass encompasses several fish species from different families. But some basses like the rock bass, smallmouth bass, and largemouth basses, and the crappies are related. These bass and white and black crappies belong to the family Centrarchidae, also known as the Sunfish family.

Can Bass Change Their Gender?

Some bass species like the black sea basses are referred to as protogynous hermaphrodites. It means that they can start their lives as females and then switch to males later in life for survival. This characteristic is not found in crappies.

Are Crappies Bad for a Bass Pond?

Yes, when crappies are introduced in a bass pond, they tend to consume all the food meant for the bass. It can result in the bass becoming thinner and growing slowly. Therefore, if you have a bass pond, do not stock it with crappies.

Despite the numerous similarities between bass and crappies, they are two different species with unique characteristics. They are strong fish, with some basses attaining a maximum weight of about 25 pounds. And the fact that they’re aggressive and give a good fight when hooked is the main reason why anglers love them