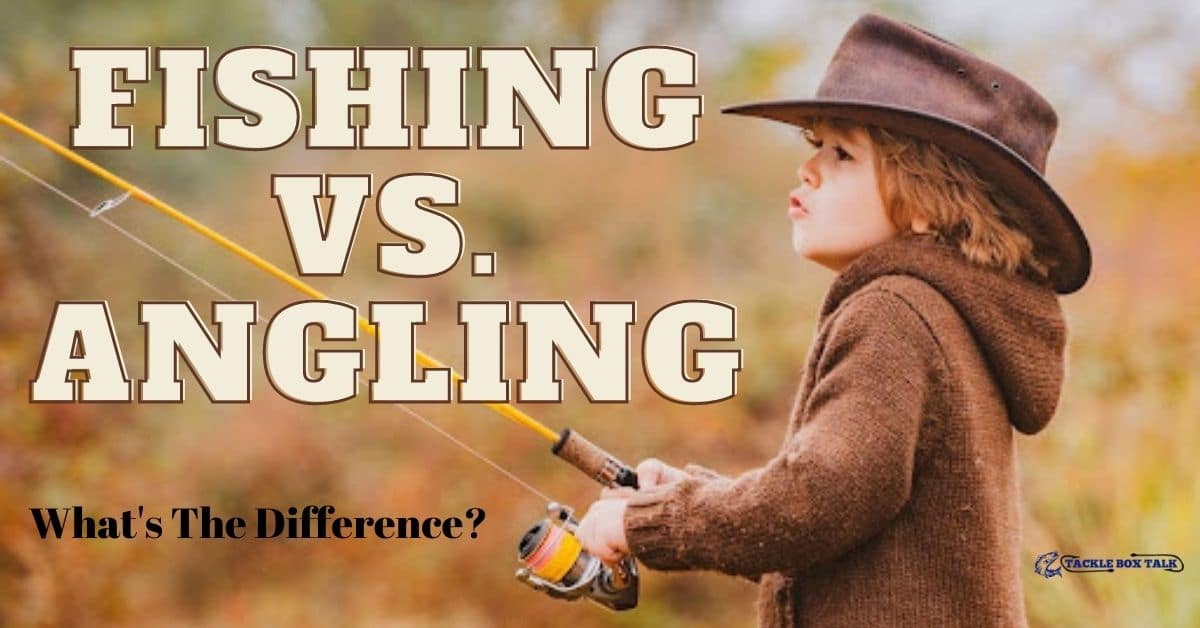 Depending on how you look, fishing and angling are either the same activities or different based on specific norms. These two terms are used interchangeably because they refer to the act of catching fish. So after thorough research, we compile the following article on fishing Vs. angling: the difference.

Fishing is the act of catching fish using a wide range of techniques like netting, spearing, trapping, and hand gathering. On the other hand, angling is a fishing method that uses a fish hook that attaches to the fishing line.

Over the last few centuries, fishing has evolved with new fishing methods like angling being introduced. Unfortunately, most people refer to fishing as angling which isn’t correct. So, in this article, we’ll show you the difference between the two and the equipment needed for angling.

Contents hide
1 Why Do They Call Fishing Angling?
2 What is Fishing?
3 What is Angling?
4 Fishing vs. Angling: The Difference
4.1 Techniques Used
4.2 Purpose
4.3 Fish Species Targeted
4.4 Baits Used
5 FAQs
5.1 What Is the Most Destructive Fishing Method?
5.2 What Kind of Fishing Is Angling?
5.3 Is a Fly Fisherman an Angler?
6 Conclusion

Why Do They Call Fishing Angling?

Every angler on the planet is a fisherman or woman, but not every fisherman/woman is an angler.

The truth of the matter is that angling was the last term to be used to refer to fishing by 1500, from the phrase “angle,” which means “fishing using a hook.” And since then, some people have referred to fishing as angling which is incorrect.

Fishing refers to catching fish; generally, it refers to any action that involves capturing fish using numerous fishing techniques, including angling. Other than catching fish, fishing may encompass seizing other aquatic animals like:

Besides catching fish for eating, fishing also includes catching several fish species for recreational purposes and then returning them to the water. Some fishes are captured and then released back to the water during the fishing competitions, while some unique species are kept as living or preserved trophies. During a bioblitz, fishes are usually captured, identified, and tallied before being released.

Even though fishing encompasses everyone who catches fish, the difference can be seen better when defining a fisherman. Fishers are individuals who use nets or bait, among other things, to capture fish for consumption and not recreational purposes.

On the other hand, angling refers to a fishing technique involving an angler catching fish using a hook attached to a fishing rod with a fishing line. A considerable percentage of the modern fishing rods have fishing reels that help payout, store, and retrieve the fishing line. And if you’re not a fan of the reels, you can try cane pole fishing and Tenkara fishing, which don’t use reels.

To catch a fish, you must attach the bait to the hook, and if you plan on using multiple hooks, you should use a lure. Sometimes a bite indicator like weighted sinker and float signals when the fish bites the bait. Angling is the leading fishing technique used in sport fishing, but some fishing companies use numerous angling techniques like trolling or longlining.

Angling is the most famous technique used by recreational fishermen, especially when practicing catch-and-release fishing. In fact, in some parts of the globe, the size limit applies to angling. It means that if the fish exceeds or is below a specific body size, then by law, it must be released.

Fishing vs. Angling: The Difference

The main difference between fishing and angling is the techniques used to catch fish. While fishers have a wide range of methods for fishing, anglers use only their lines and hooks to attract and eventually catch fish. On the other hand, fishers can use cages, nets, and traps to attract and catch fish.

Folks or companies fishing for commercial purposes use numerous techniques to catch fish, including trapping, netting, spearfishing, and hand gathering. These techniques are designed to attract a huge volume of fish, irrespective of the type.

Even though angling is a fishing technique, anglers catch fish for recreational purposes and always release most catches. On the other hand, the main goal of fishers is to capture as many fishes as possible for commercial purposes. In fact, not catching a fish means no income, and that is because fishing is their full-time job.

Therefore fishing is a full-time job for fishers, while angling is a recreational activity that most people love. Fishers invest a lot in their trade, and their main goal is usually catching lots of fish with ease.

With angling, the fundamental goal for some individuals is catching a specific species in the sea. And they can release all the other species that bite their hooks until they get a trophy-sized fish of a certain species. On the other hand, fishermen look for a wide range of fish species for maximum profits.

Anglers target one type of fish at a time, while fishing is focused on several species at once. Some fish species targeted by anglers in Europe include barbel, catfish, European Perch, roach, rudd, carp, and tench, bream, and pike. In North America, the most common species among anglers are sunfish, bluegill, crappie, salmon, muskellunge, walleye, pike, yellow perch, and bass.

When doing commercial fishing, fishermen use both artificial lures and live baits to attract a wide range of fish, with their only goal being to attract and capture as many fishes as possible. After all, live baits can attract different kinds of fish species at a given moment.

Anglers love artificial lures because they are durable and very effective when attracting a specific fish species. When angling, most people prefer using lures that are designed to attract fish. An artificial bait angler uses a lure that may resemble a creature that the fish preys on.

What Is the Most Destructive Fishing Method?

The most destructive fishing technique is bottom trawling. Industries commonly use this method, which involves dragging a net across the seafloor, collecting everything in its way. These nets can damage the seafloor habitat.

What Kind of Fishing Is Angling?

Angling refers to catching fish using a hook and a fishing line instead of a net. This type of fishing always includes a sinker or bait that is usually attached to the hook. And the good thing about it is that it can be done on a boat, the shores, or off a deck.

Is a Fly Fisherman an Angler?

An angler is a fisherman, but a fisherman is not necessarily an angler. And that is because angling is a fishing technique commonly used in recreational fishing. After all, the act of catching a fish irrespective of the method used is known as fishing.