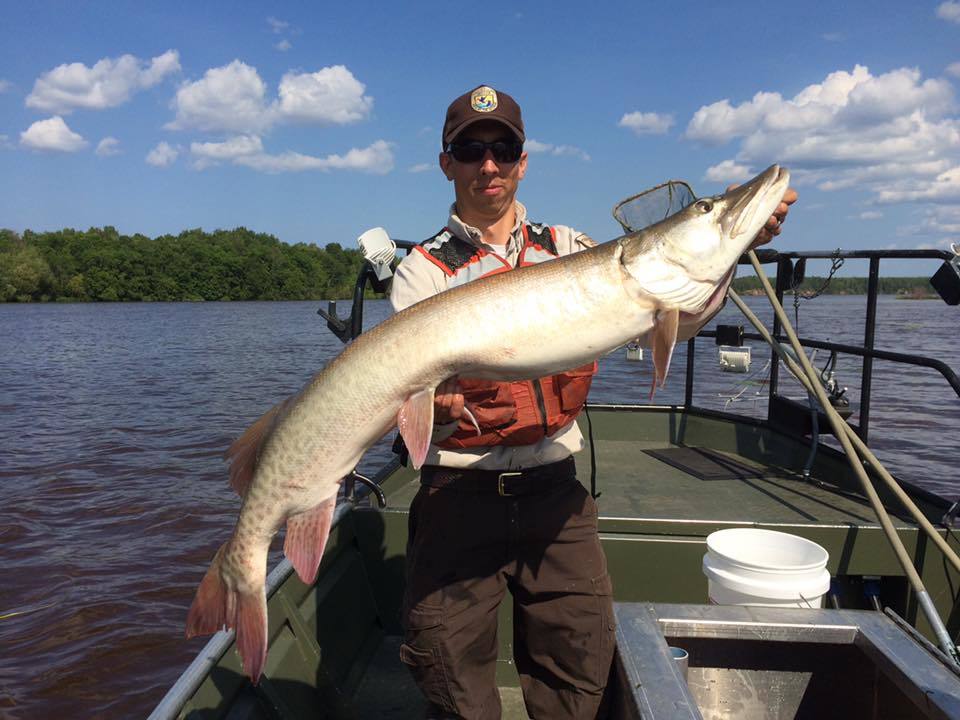 Want to know the ins and outs of catching monster muskies? Look no further I have compiled a list of the top 10 muskie fishing tips that will bring home those monster muskellunge you’re dying to wrestle with! These are proven techniques that many an angler have tested and tried and have enjoyed an abundance of muskie throughout the fishing season.

Weather conditions play a vital role in where you are going to be fishing for these monster muskies. When you have a cloudy, rainy, and windy day you will find muskies hanging around rock structures. The Muskies will be found in shallow water as well the more the wind picks up.  But be careful when you fish close to rock structures on windy days. You don’t want your boat smashing into the rocks.

When the weather is calm and sunny, you will find the muskies in the weed beds and sandy areas. Muskies like the weedy areas because they can go undetected when they are searching for prey. And the weeds give off oxygen.

This tip is more for fall fishing for muskie. Crankbaits work the best when the weather turns cold. This is because crankbaits smack against the rock structures and ride over the weed cover creating a flash that muskies love. The muskies are staying down deeper in the colder weather, and a crankbait can sink to the deeper areas that your other musky baits will not. So the muskie can’t resist a lure right in front of them. They will strike it with a vengeance!

Setting your hook may seem obvious, but with muskies, it’s critical that you set the hook in their mouths; otherwise, you will lose many of them. You need to set the hook deep and make sure you are ready when the muskellunge strikes because he is going to strike hard! Hook setting for muskie should be practiced before going out on the lake so that you will be ready when the time comes. No second chances when that monster muskie hits the end of your line. It’s due or die time!

Tip 4 – Master The Use Of Bucktail Lures

If you want to catch that trophy monster muskie then you have to learn how to use bucktails effectively. Bucktails are a pretty simple and straightforward lure to fish with, but there are some tricks that you can use to make those muskies go wild for them.

Bucktail jigs work well for muskie fishing because of the realistic hair on them that moves well and realistically in the water. Muskies love this movement of the hair, and it attracts them like nothing else. When a muskie latches on to a bucktail the hair compacts down revealing the hook, now you can have a clean hookset without anything getting in the way.

Here are a few practical ways to present your bucktail.

Try different speeds when you are retrieving the bucktail and when you find the right retrieval speed for the area you are stick with that speed. This will all depend on if the muskies are feeling aggressive or not on that particular day and lake.

One of the best times to catch the monster muskies is right before a storm is about to hit. For some reason, muskies get aggressive when the weather changes. So anytime there is a major weather change is an ideal time to catch these monsters of freshwater!

The figure 8 method works well for muskie fishing because muskies will follow their prey for a while before they decide to take action on that prey. To do this cast your line out. When the lure starts getting close to the boat put the tip of your rod in the water. Make wide sweeps in a figure 8 style, and if there is a muskie following your lure, this will intrigue him to strike your lure. Make sure these figure 8 turns are wide because muskies are a big fish and won’t be able to follow small figure 8 turns.

In the early spring right after or during the melting period of the ice you will want to find the areas where the muskies are going to spawn. After you have found those areas which would be in the low water flats, you will want to fish for the muskies close to these areas. They will be down in the deeper areas so, focus on fishing drop-offs and open waters that are close to the spawning areas.

You will find muskie there because they know they will be spawning soon but the water where they need to go and spawn is still too cold. But the water down deeper is warmer, and that’s where they will hang out waiting for the spring spawn.

The lures that work best at this time of the fishing season are crankbaits, swimbaits, and bucktail jigs. When fishing the bucktail jig at this time of year, you will want to focus on vertical jigging. There will be many muskies in when you find the right area and your chances are good that you will snag a monster out of the bunch!

Fishing for muskies in the summer can be a frustrating adventure especially if it is sweltering. Muskies won’t feed when it is hot out. So to remedy this fish only in the early morning hours before the sun comes up or during the evening. These times of day will give you the best chance at catching muskies in the summer months. Avoid fishing muskies midday if at all possible during the summer unless it is a cool summer day.

When fishing for muskie in the autumn, you will find them in more shallow areas. Focus you fishing in the autumn around weed beds and the edges of weeds. The later in autumn that you go the shallower the muskies will go. Get your bucktail jigs out this time of year. The muskies will eat them up. But keep your speeds of retrieval of the bucktails at a regular pace not over aggressively fishing them.

Your back will thank you if you use a long fishing rod when fishing for muskies. The use of the long rod is because you are casting big heavy baits usually when you are muskie fishing. The shorter your rod, the harder on your back and shoulders will be.

If you have any questions or comments, please leave them in the comments section below. I hope you find this article useful and as always Happy Fishing!