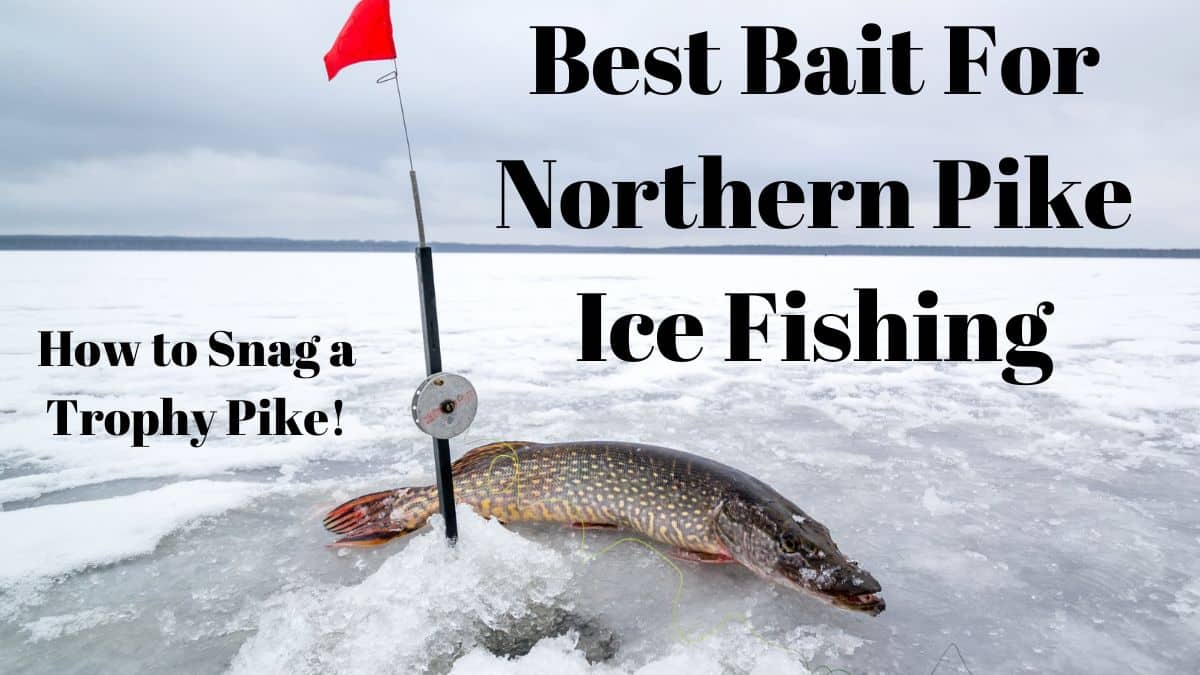 Ice fishing can be challenging to say the least. But when you target Northern Pike, you are in for a challenge of a lifetime. Pike is not a tiny fish like ice fishing for perch. Northern Pike can grow to be 40 to 50 pounds in some places, and they put up much more of a fight when trying to pull them through that small hole in the ice.

But if you know the right bait, tackle, and a few techniques to use, you will have a much better success rate at catching big pike. In this article best bait for northern pike ice fishing, we will explore some of the best baits to use while targeting pike through the ice, plus a few techniques and tackle you can use to add more of this delicious catch to your freezer.

Northern pike is a carnivorous freshwater fish found in North America, Eastern Europe, Britain, and Ireland. The largest northern pike on record was caught in Germany and weighed in at 55lbs.

Northern Pike will go after several different types of prey, including minnows, earthworms, crustaceans, small perch, crayfish, leeches, and insects. They are even known to eat birds and small mammals from time to time. Pike are not very particular when it comes to prey.

They will attack anything within reason that’s present in their waters. So when it comes to bait for pike, you have a wide variety to choose from. Here are the best baits to use while ice fishing for Northern Pike.

When it comes to bait, there are all sorts of options available. From live bait to artificial lures, anglers can choose from a wide range of options. However, one type of bait that is often overlooked is the sucker minnow. Although they are not as flashy as some other baits, they can be incredibly effective when fishing for northern pike.

Sucker minnows are native to the northern United States and can grow up to two feet in length. They are a popular choice of bait because they are relatively easy to catch and stay alive in a Livewell for long periods. In addition, their size and shape make them an excellent choice for trolling or casting. So if you’re looking for an effective but underutilized bait, consider giving sucker minnows a try the next time you go fishing for northern pike.

You can also use fathead minnows or any type of minnow that will work to catch pike in very cold water.

Golden shiners are a type of minnow that is commonly used as bait for northern pike. Native to the eastern United States, golden shiners typically grow to be about four inches long and have a dark back with a gold or silver belly. These fish are relatively easy to catch and make excellent live bait, as they are known to swim in large schools and are attracted to bright colors.

When used as bait, golden shiners are typically hooked through the mouth or nose and cast out into the water. Northern pike are predators that will strike at almost anything that moves, so it is important to use active and easy-to-see bait. Golden shiners fit this bill perfectly, making them one of the most popular baits for anglers targeting this species.

Anglers looking for effective bait for northern pike should consider using shad. Shad are a type of fish known for their large size, making them an ideal bait for pike. Additionally, shad are relatively easy to catch, so anglers will not have to spend much time trying to obtain them.

When using shad as bait, cutting off the head and tail before putting them on the hook is essential. This will help keep the bait in place and prevent it from coming off while casting. Additionally, shad can be cut into pieces and used as dead bait, which can be highly effective in attracting pike. Overall, using shad as bait is a great way to increase your chances of catching the northern pike.

Pike feed on yellow perch. This is because yellow perch are active predators with high oil content, making them an ideal choice for attracting pike. In addition, yellow perch are relatively easy to catch, meaning that anglers frequently have a good supply of bait on hand.

When choosing yellow perch for bait, it is important to select healthy fish of a good size. Additionally, the fish should be gutted and bleed before being used as bait, as this will help to release their oils and attract more pike. When properly used, yellow perch can be an effective and reliable bait for northern pike fishing.

Using bluegills as bait is an excellent choice for pike anglers looking to land a trophy northern pike. Not only are bluegills easy to catch, but they are also a favorite food of pike. When fishing with bluegills as bait, it is essential to hook the fish through the lips or nose to avoid crippling it.

This will not only improve your chances of landing a big pike, but it will also increase the survival rate of the bluegill when it is released. In addition, using live bait will typically produce better results than using artificial lures. With the right equipment and technique, you can use bluegills to bait your way to a trophy northern pike.

Alewives are small, freshwater fish native to the Great Lakes region. While they are not considered good table fare, they make excellent bait for northern pike. Their small size makes them easy for pike to consume, and their high-fat content makes them very attractive to these predators.

In addition, alewives are relatively easy to catch, making them a convenient bait choice for anglers. When using alewives as bait, it is crucial to hook them through the nose to avoid gut-hooking the fish. This will help to increase your chances of landing a trophy northern pike.

Using artificial lures is also an effective bait for northern pike, especially when ice fishing. Pike are not usually finicky eaters and are even less picky in the winter when bait fish can be scarce. So spoons, rattletraps, jigs, and spinners work best when targeting northern pike through the ice.

But don’t spend more than thirty minutes per hole using artificial lures. So be prepared to drill many holes when using artificial bait. Also, using larger, flashy colored lures work best. If you don’t want to drill a ton of holes, then I would stick with live bait.

What are The Best Live Bait Rigs For Northern Pike Ice Fishing?

There are a couple of soild live bait rigs you can use when ice fishing for northern pike. They are:

A quick strike rig is a type of fishing rig used to catch fish with minimal effort. The rig consists of a weighted hook that is attached to a line. The hook is then baited with an appealing lure or bait. When a fish bites the bait, the weight of the hook pulls the line tight, setting the hook in the fish’s mouth.

Anglers targeting specific fish species, such as northern pike, often use quick strike rigs. The rigs can be customized to suit the type of fish being sought and the type of lure or bait being used. Quick strike rigs are essential for any angler looking to maximize their chances of success.

A single treble hook rig is a fishing rig that uses a single hook baited with multiple lures. The rig is designed to increase the chances of landing a fish by using multiple attractants. The lures can be anything that is known to attract fish, such as worms, minnows, or small crabs.

The single treble hook ensures that the fish stays on the line once it is hooked, and the multiple lures make it more likely that a fish will be attracted to the bait. This rig is commonly used when fishing for baitfish but can also be used for other types of fish.

When it comes to ice fishing, there are a few things you need to know to be successful.

Well, there you have it. If you follow the tips and best baits to use, you will have a better chance at catching more bigger pike through the ice on your next ice fishing trip. With the right lures and bait, hungry pike will be feeding at the end of your line for their next meal! And hopefully, you will land a trophy pike the next time ice fishing season rolls around.

If you have any questions or comments, please leave them below. Until next time Happy Ice Fishing!