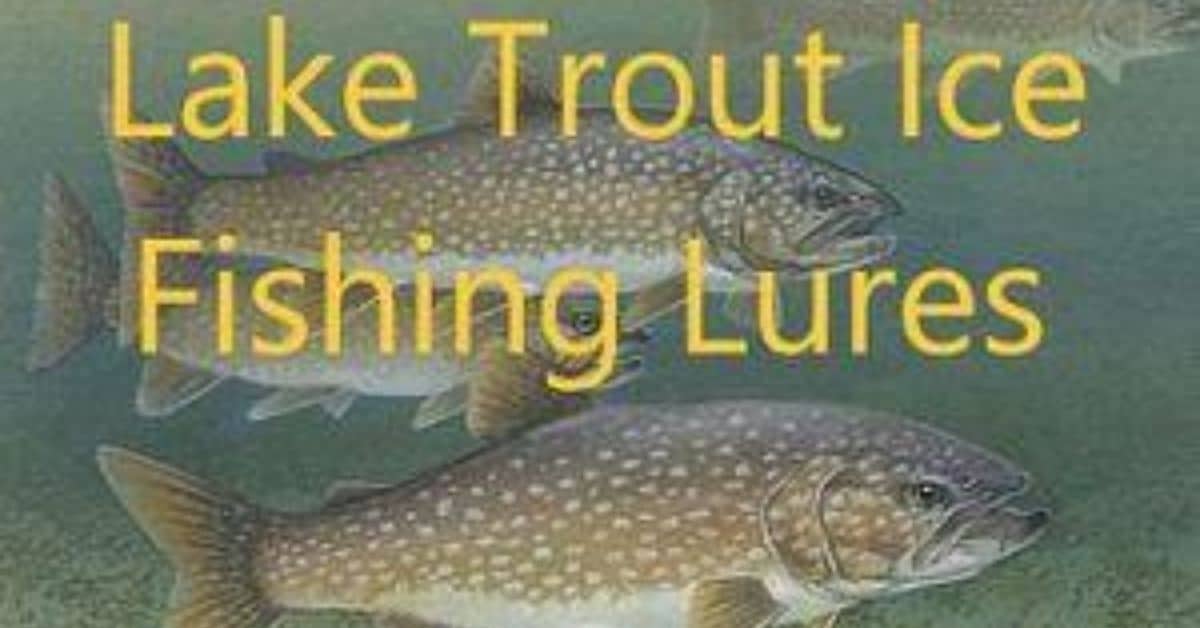 So you’re looking for lake trout ice fishing lures? Lake Trout or lakers as they are called in the angling world are different when it comes to cold temperatures than fish like panfish, bass, perch, and walleye. Lake Trout thrive when the ice starts forming.

They like it when the water is around 30 to 40 degrees Fahrenheit compared to when it is 60 to 70 degrees Fahrenheit. Trout basically will eat anything that’s around them at the time. They are tough fish, and they taste oh so good as well.

They can be hard to find under the ice so you will want to pack some patience before heading out to ice fish for lakers. You will want to plan on drilling two holes in the ice side by side because these fish like to fight and if you don’t do this, you will end up losing that fight when the fish gets bumped up under the ice near the hole tearing the bait out and swimming away. That can be the most frustrating thing ever so make sure to drill two holes making them into one. It will end up being a 16″ to 20″ huge hole depending on the size blade you have for your auger.

areas during the ice fishing season which can be under 10 feet deep. Compared to other fish that tend to move deeper in the colder weather. But they can go as deep as they want it all depends on where the food is at. Lake trout can grow to 60 pounds or more and enjoy feeding on other fish species like salmon, ciscoes, and whitefish. They are cannibals as well as eating their very own kind! They are free to roam pretty much anywhere they wish in the hard water season.

You will find them around deep basins of water with submerged undergrowth such as reefs, dead trees, and islands. You will see them in areas where big schools of fish hangout such as the areas I mentioned earlier. They like to herd their prey around bends and inside turns making it easier to feed on them.

Now that you have an idea of where to find lake trout in the winter and what they consume I will get into answering what kinds of lake trout ice fishing lures and live bait to use.

So now that we know that lake trout feed on fish species, not unlike themselves it gives us a good idea of what type of lures and live bait will work. I will start out explaining what live baits are best used for catching hard water lake trout:

Lake trout love the live bait when they are in an inactive state. Trout usually takes them closer to the bottom of the lake. The following are some live baits lakers go after.

Trout are hungry creatures in winter, and they primarily go for the smell of live bait when they are inactive. But they will go after either live or shiny colored bait if they are active or inactive. They will tend to go after smell more when their dormant and the visual look of an artificial lure when they are busy. You will have to experiment like any other fish that you are fishing for in the winter.

Nightcrawlers would be my first choice because they are easy to transport to the ice. You will need to keep them from freezing solid like any other live bait that you use. Just keep them in an insulated bucket should do the trick.

You can just put the nightcrawlers on a regular fishing hook and use 1 to 2-ounce sinkers and drop your line so that it goes close to the bottom of the lake. This technique works for the inactive lakers. The active lakers are another story, and I will explain that a little farther down in the article.

With minnows, you can either throw them on a hook and add your sinkers about 1 to 2 ounces. Or you can add a spinner to the mix and catch them by the smell of the bait and by the flashy look of the bait. Using a bright colored spinnerbait would be your best option. Either way, lakers go crazy after minnows in the wintertime.

You can also use Wax Worms or waxies when fishing for lake trout in the winter. You need to couple them with a jig, and this will jump-start the lakers into a feeding frenzy!

Now that we have discussed what live bait to use I’m going to explain the best lake trout ice fishing lures to use.

You will want to find lures that mimic the types of fish that are part of their diet naturally like the ciscoes and salmon. When they are presented to the trout, the best kinds of lures will mimic a struggling or dying fish. They will typically go after those kinds of artificial bait because that’s what they would go after if it was a real live fish.

Colors that are used would be the natural colors of their prey which would be silver and white, maybe a little pearl color mixed in. When you’re, fishing them in shallow water, I will use a jig with a 4-inch long curly tail hooked on it.

Ice fishing with spoons can be tricky but rewarding if you present it rights. You will want to let the spoon drop then give it a quick jerk. Reel it in about halfway up and then let it pause for a second then dropping it back down.

You can also use live bait hooked to the spoon to give it that live smell those lakers are craving for. When the spoon wiggles downward it looks like a dying baitfish in free fall.

Lake trout are going after tubes in the cold months. They especially like the white tubes. Don’t ask me why but I’ve heard many ice anglers of late saying they are getting hits on these white tubes.

Tubes come in many shades of color. So I would get a pack and try various colored ones out and see which color they like to but on best in your area.

With tubes, you need to keep it moving just above the bottom of the lake bobbing it up and down so the fish will strike at.

The next lure we have in the bucket is the crankbait. One of the most widely used ice fishing lures by avid ice anglers. There are many kinds of crankbaits that you can purchase. Crankbaits usually mimic the laker’s prey in the way that it bobs up and down and swims through the water.

These are known for their rattle noise when going down and when coming up. Crankbaits attract the fish, and they come to you instead of you going to them. The paint jobs on crankbaits vary wildly, but the main attraction is the rattling sound they make.

They do have crankbaits that are more like three baits in one. Making it look like a school of fish, and we know trout love to go after schools of fish especially in the wintertime.

Try these crankbaits out next time you hit the ice.

Lastly, we have spinner jigs. One of the most widely used ice fishing lures by avid ice anglers is the jig. And the jig works exceptionally well for hard water trout fishing. All you have to do is pick the color and kinds of jig you want, tie it to your line, and your off and jigging.

Spinner jigs work well because of their shiny design and vibration effect in hard cold water.

Now that I have given you some options on what kinds of lake trout ice fishing lures are out there. I will the type of fishing line you will want to use and rod length.

For fishing lakers, you want to go with about 10lb test fishing line in fluorocarbon or monofilament. With these lines, you can get a more significant radial drop which is nice to have with the artificial lures you are using.

You will want a stiff ice fishing rod about 40 inches long with a little action in the tip.

Well, now you have all the information you need on lake trout ice fishing lures and how to use them effectively. It is time for you to get out there and try these lures and techniques out for yourself.

Trout can be mysterious

Like any other kind of fish when it comes to their eating habits. It all depends on the lake, what time of day, the temperature of the water, if it’s cloudy or sunny, lots of snowpacks, minimal snowpacks. You just have to experiment with colors, sounds, movements, and smells.

So good luck with your ice fishing for trout efforts and I hope you pull in that big one! If you have any questions, comments, or trout fishing stories you would like to share, please leave them in the comments section below I would love to hear from you!

Cory is a content writer-editor for websites that he owns about various topics such as living off the grid, portable generators, internet marketing, fishing, and sports. When he is not working on his websites he is out doing the things he writes about.