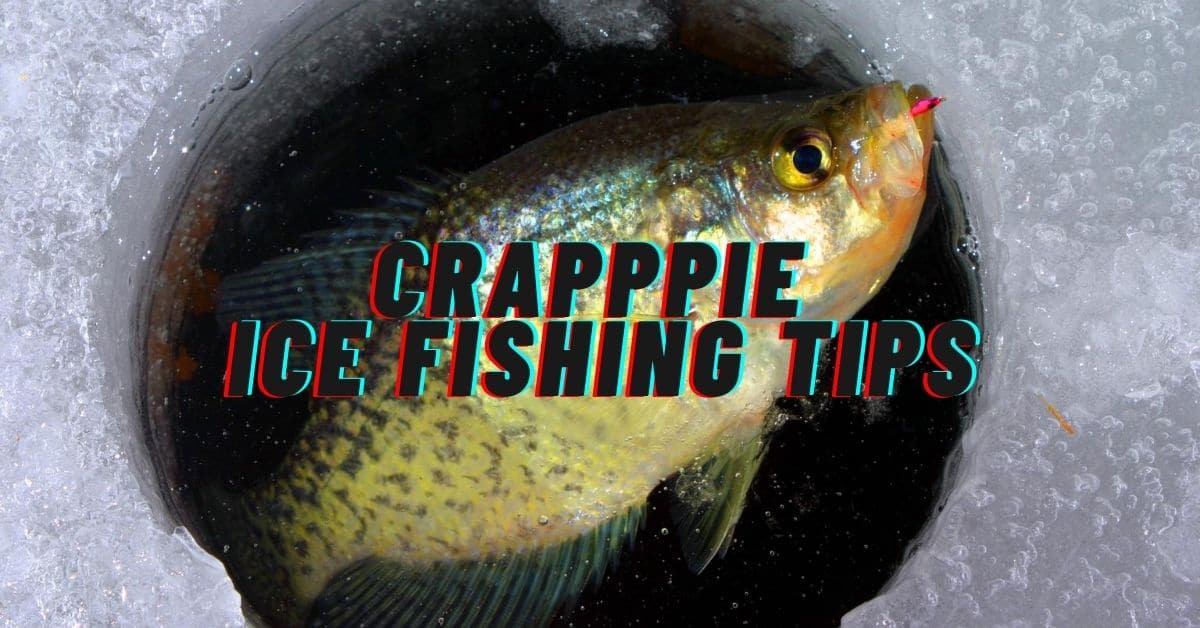 One of my favorite fish to ice fish for is the crappie. I like to fish for panfish and perch as well but crappies are just a little bigger than panfish usually, and they taste oh so good. I often only catch crappies with wax worms or waxies as we like to call them in Wisconsin. Jigs work as well, and if you want to spruce things up a bit, you can attach a waxie onto the jig hook. It’s the sport of catching them that I like the most. In this article, I’m going to explain some crappie ice fishing tips.

Before we do that, let’s take a look at the two species of crappie that swim our beautiful lakes and rivers.

To start, we have the White Crappie. In scientific terms, the white crappie is referred to as ‘Annularis Rafinesque.’

That’s as far as I’m going to get into the scientific name because one; I don’t know how to pronounce it which is OK because this is an article and two I would bore you and me to death lol. They can grow to about 20″ inches in length and to a weight of about 5lbs.

White crappies enjoy dining on the smaller fish of their predators such as walleye and pike. They also like to eat insects and plankton. White crappies eat twice a day. When the sun is coming up and when it is going down.

So that gives you an idea when you want to be fishing for these fellows. During the day they don’t move about much and stay along the clumps of weeds and submerged trees.

The other crappie species is the Black Crappie or the nigromaculatus longword, to say the least! Obviously, black crappies are darker. They can grow to the same length and weight of the white crappie. Both species of crappie feed at the same times of day and hang around the same areas during the day. Not much difference between the two. So if you find white crappies in one area, you might find the black ones in the same spot.

Now that I explained the two species of crappie I will proceed with some crappie ice fishing tips.

Tip 1 – Slow down when jigging

A Crappie’s metabolism slows down when the weather turns nastily cold. So does their reaction time to the presentation of lures and bait. What you want to do is get yourself some smaller sized jigs about 1/64 oz in size and drop them slowly to where the fish are.

Almost right in front of their lips and let it suspend they’re for awhile not jigging it too much, and if they are interested, they will bite. Crappies don’t like to have to go after their bait very fast in the winter.

Here is tip 2 of the crappie ice fishing tips. When the crappies haven’t been biting all day but all of a sudden after you put fresh bait on your line they start biting. Don’t disrupt their feeding pleasure by leaving the same bait on for long periods.

Because they will end up not bitting when the scent fades on your bait. To combat this, you want to keep changing your bait every 10 to 15 minutes. Some anglers even change bait every 5 minutes. With this technique, you will want a couple of lines going so that you can have one in the water all the time.

Doing this will keep the crappies coming back for more. And attracting more of them through the fresh smell of the bait. It doesn’t matter what type of bait your using. Minnows, wax worms, and even worms will work with this technique.

That’s right like I stated at the beginning of the article crappies will be found in weed beds. What are they doing in the weed beds? They are searching for small fish that might be swimming around in there. They are also looking for the dead bug larvae from the previous season. And like I said before crappies will be found around fallen trees, weed lines that sort of thing. They love to hide in the cover, not unlike bass.

When Everything Is Said And Done

There are your crappie ice fishing tips for today boys and girls. Try these three tips next time your out ice fishing for crappies, and you could be surprised at the results. Now nothings guaranteed. Those crappies can be hard to find some days so any little trick you do might make the difference from you having an excellent crappie supper or having to heat some frozen fish sticks in the microwave!

I hope you got something out of this article and if you have any questions or comments post them below, and I will respond to each question asked. As long as it is fishing related that is.

Ice Fishing Crappie Jigs – Which Ones The Right One?